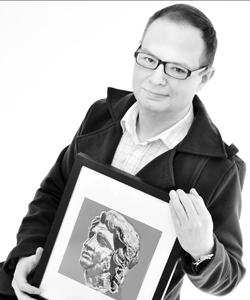 Dr Moore embraces the liberal arts tradition and this is reflected in both the depth and breadth of his research. His doctoral thesis, on Plato’s Laws, takes an innovative approach to this often neglected text. It is a detailed investigation of Plato’s final opus in the context of Hellenic philosophical, literary and historical traditions. He addresses issues of ancient political science and sexuality informed by modern gender theory and cultural studies. Under the title Sex and the Second-Best City: A Study of Sex and Society in the Laws of Plato, it has been published as a monograph by Routledge.

Kenneth’s second book, titled Plato, Politics and a Practical Utopia, deals with Platonic political theory and ancient city planning. His future research will focus on utopianism, constitutionalism and cosmopolitanism, as derived from antiquity, and their application in real-world case-studies. He is particularly interested in the ways that modern political philosophers have sought to incorporate ancient political thought into their formulations for the contemporary world and in recent history.

Dr Moore teaches Ancient Greek history, Ancient Roman history, the history of Alexander the Great and his later reception along with Chaucer’s England and the history of Witchcraft in early-modern Europe. He supervises third year dissertations on a range of subjects dating from Classical antiquity up the history of the Crusades and the Knights Templar. He is keen to supervise any PhD students interested in ancient Greek and Roman historical topics.

Of Philosophers and Kings: Concerning Philip II of Macedon’s Alleged “Debt” to Plato

"Polybius’ 'Borrowed' Portrait of Scipio Africanus and the Historiography of Alexander the Great".

Open Access
File
economic theory
prosperity
evaluation
Ideologies
economics
Your message has successfully been sent.
Your message was not sent due to an error.
If you made any changes in Pure these will be visible here soon.