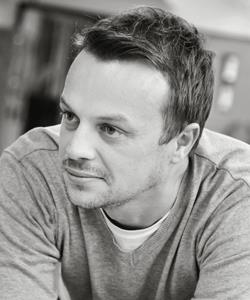 After graduating with a BA (Hons) in Graphic Design from Northumbria University in 1996, Michael joined a leading North East design and advertising agency as a graphic designer working on a diverse variety of accounts such as Bang & Olufsen, Airtours, Northern Sinfonia and Arran Aromatics.

Between September 1999 and September 2000, he successfully completed a Master's degree in Marketing and Management for Design at Huddersfield University, which, as a related discipline enables him to have a wider perspective on the role and application of graphic design. During this time, he worked on a freelance basis to supplement his studies.

On completing his MA he joined a design and marketing agency in North Yorkshire, again as a graphic designer, with the opportunity to be much more involved with the design process from start to finish. Clients included a variety of internationally renowned, market leading names from various industry sectors such as: Corus, World Television, PR Newswire, United Phosphorus and York Bioanalytical Solutions.

2004 saw a return to self-employment, working regularly with previous clients on selected projects whilst also forging links with new clients including Middlesbrough FC, Newcastle City Council and Scottish Glass Society. Whilst maintaining industry practice, he maintains an interest in teaching, which started in 2007 with the role of part-time tutor on a Graphic Design Foundation Degree in Durham, which was both rewarding and enjoyable.

As a professional Graphic Designer for 15 years, Michael's research interests have been largely practice-based. In this time, as a self-initiated project, he was involved in forming a small, independent t-shirt label, and was fortunate enough to have some of his garments featured in magazines and worn on television. Not only was this a creative outlet, but also challenging in a marketing sense. Michael has an appreciation for all aspects of graphic design, but particularly that with a strong typographic or conceptual element.

Michael has played a key consultancy role within the University's remit to help support small to medium size enterprises based in the North-East of England.

This has seen Michael participate in two KEI (Knowledge Exchange Internships) projects with businesses, helping new employees understand the area of graphic design. Also, Michael helped audit the company's existing design offerings and helped improve areas such as branding, marketing communications, web presence, etc. He was also involved in a cross-disciplinary team from Teesside University that spent time problem-solving issues within a well known financial institution, with potential solutions presented to the Board of Directors.

Michael is currently working in an advisory capacity on a collaborative project that would see medical statistics presented in a more accessible infographic format for the benefit of the general public.

Websites
Health
Your message has successfully been sent.
Your message was not sent due to an error.
If you made any changes in Pure these will be visible here soon.